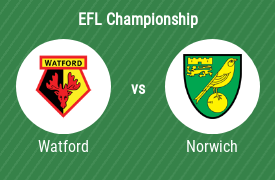 Watford and Norwich meet in the EFL Championship on 26.12.2020. Kick-off is at 20:45. The stadium for the match on Saturday is Vicarage Road. The game brings together the team currently in 5th against the table-toppers.

Watford FC lost its last game 2:0 against Huddersfield. In the 20 games of the recent six months, the home team was able to win 9 games. The team has had seven victories, two draws and one defeat at their home stadium. In the current season 20/21, Watford has so far managed to win 7 out of 10 home games (70%). Two games ended in a draw and one game was lost at home. In total, Watford has nine victories, seven draws und four losses after 20 season games.

More goals are scored by Xisco’s team in the second 45 minutes of the game. Watford currently achieves an average of 1,90 goals per match at home and concedes 0,90 goals. This results in a total of 2,80 goals per game. In the current season, home matches most often end 1:1, 3:2 or 1:0.

In their last game, Norwich won 2:0 against Cardiff City. This season, the team has been winning 7 out of 10 matches in away stadiums (70%). The statistics for the past 6 months show thirteen wins, four draws und three defeats. Norwich was able to win seven away victories. The team lost two matches in the foreign stadium and in one game the teams separated with a draw.

There have been 1,60 away goals scored by Daniel Farke’s team on average this season. Most of these coming in the second 45 minutes of the game. When Norwich plays away, there is an overall average of 2,70 scored goals per match. Last season, Norwich averaged 0 goals for and 0 against in their away games. In the current season, Norwich’s away games mostly ended 2:1, 1:0 or 1:3.