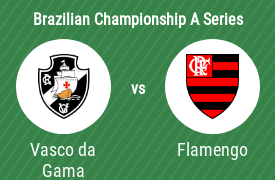 The Brazilian Championship A Series match between Vasco da Gama and Flamengo will take place on 10.10.2020 at 22:00. This fixture sees the currently 10th in the table contests the 3rd in the table.

In their last match CR Vasco da Gama lost 3:0 against Bahia. The hosts have magaged to win 5 of their 13 games of the recent 6 months in their favour. The team has had three wins, two draws and one defeat at their home stadium. In the current season, Vasco da Gama won 50% (3 out of 6) of the matches in their own stadium. 1 times it was enough to score one point, while 1 times the guests took all points. After 13 games in the season, Vasco da Gama has five victories, three draws and five defeats.

In the second half-time, coach Ramon Menezes’ team is able to score most of their goals. Vasco da Gama currently achieves an average of 1,17 goals per game at home and concedes 0,67 goals. This results in a total of 1,83 goals per game. Previous season, CR Vasco da Gama scored an average of 1,05 goals per home match and conceded 1,16 goals. Home games usually ended 1:1, 1:0 or 2:1 in the previous season. The most often final score in their own stadium last season was 1:1, 1:2 or 1:0.

Their last match, Flamengo had won 3:0 against Sport. The team has been victorious in 4 out of 7 away games (57.14%) so far in this season. Flamengo has won seven games and lost three matches in the last 6 months, with three games ending in a draw. Flamengo managed to win four away victories. The team lost two matches in the foreign stadium and in one game the teams separated with a draw.

In the present season, coach Domenec Torrent Font’s team have scored an average of 1,43 goals per away game, mainly in the second 45 minutes of the game of the match. When Flamengo plays away, there is an overall average of 2,86 scored goals per match. Last season’s statistics show Flamengo scoring 1,58 goals per away match, while they conceded 1,00 goals. As the away team last season, the side’s game most often ended 1:0, 2:1 or 2:0. Flamengo’s away games this season have ended primarily 1:0, 1:1 or 0:2.