The Norwegian OBOS-Ligaen meeting between Sandnes and Stjordals/Blink will take place on 18.11.2020 at 18:00. This means that the present 10th place side is playing against the 11th placed team.

In their last match Sandnes Ulf played 1:1 against Kongsvinger. In the 25 games of the recent six months, the home team has won 8 games. Sandnes had seven victories, three draws and two losses in their home matches. Sandnes has managed to win 7 out of 12 home games (58.33%) in the current season (2020) so far. Three games ended in a draw and two matches were lost at home. In total, Sandnes has won 8 out of 25 season games. While it was enough to draw seven matches, ten games ended without points.

Coach Steffen Landro’s eleven tends to score in the second half. Sandnes currently achieves an average of 1,83 goals per game at home and receives 1,42 goals. This results in a total of 3,25 goals per game. A look at last season’s goal record shows Sandnes Ulf at home with an average of 1,47 goals. The average number of goals conceded in front of their own fans is 1,67. The most common results at their home stadium last season were 3:2, 1:2 or 2:3. The most frequent final score in their own stadium last season was 2:1, 1:1 or 3:1.

In their last match, Stjordals/Blink lost 2:3 against Grorud. The team has been winning 3 out of 11 away games (27.27%) so far in this season. In the past 6 months, Stjordals/Blink has won eight games, six matches ended in a draw and six matches were lost. In games in away stadium three wins were achieved. Five games were lost while three matches ended without a winning team.

Roar Vikvang’s team scores 1,36 away goals per game this season, mainly after the half-time break. When Stjordals/Blink plays away, there is an overall average of 3,09 scored goals per match. Last season’s statistics show Stjordals/Blink scoring 0 goals per away match, while they conceded 0 goals. Stjordals/Blink’s most commonly played away 1:0, 2:2 or 1:2 in the running season. 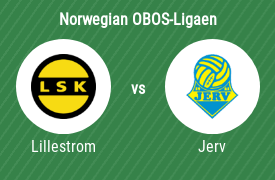