On 11.12.2020, Mladost Lucani and Napredak will cross swords in the Serbia Superliga. The referee will get the game underway at 16:00. This fixture sees the currently 9th placed team contests the 16th. Mladost Lucani won zero matches in their past games between the sides, Napredak won two matches and zero games ended in a tie.

FK Mladost Lucani won its last encounter 3:2 against Novi Pazar. In the recent 6 months, the home team has managed to win 8 out of 19 matches. The team has had seven wins, two draws and one loss at their home stadium. In the current season, Mladost Lucani won 66.67% (6 out of 9) of the matches in their own stadium. 1 times it was enough to score one point, while 1 times the guests took all points. In total, Mladost Lucani has won 7 out of 17 season games. While it was enough to draw four matches, six matches ended without points.

More goals are scored by Nenad Milovanovic’s team during the second 45 minutes of the game. Mladost Lucani currently scores an average of 1,44 goals per home match and receives 1,11 goals. This results in a total of 2,56 goals per game. A look at last season’s goal record shows FK Mladost Lucani at home with an average of 1,33 goals. The average number of goals conceded per home match is 1,07. The most frequent scores at their home stadium last season were 2:1, 2:0 or 1:0. In the current season, the most frequent result in home matches was 2:1, 3:2 or 1:1.

In their last match, Napredak won 3:1 against Vozdovac. The team has been victorious in 1 out of 8 away games (12.5%) so far in this season. Napredak has won six games and lost nine games in the last 6 months, with four games ending in a draw. During that period Napredak won two away games while the team lost six matches at away stadiums and one game ended in a draw.

Goran Stevanovic’s team scores 0,38 away goals per game this season, mainly in the first half. When Napredak plays in an away stadium, there is an overall average of 2,25 scored goals per match. Previous season’s statistics show Napredak scoring 1,07 goals per away match, while they conceded 1,53 goals. Last last season, away matches most often ended 0:1, 1:2 or 0:2. In the current season, Napredak’s away games mostly ended 0:3, 0:1 or 2:1 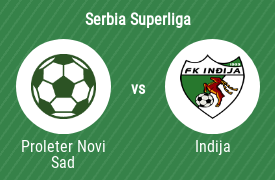