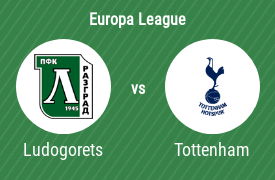 Ludogorets and Tottenham play each other in the Europa League on 05.11.2020 at 18:55. This means that the current 4th placed team is playing against the 2nd.

In their last match Ludogorets Razgrad lost 4:3 against Linz. The hosts were able to decide 1 of their 3 games of the past 6 months in their favour. The home record for the last six months shows zero wins, zero draws and one defeat. In the current season, Ludogorets won 0% (0 out of 1) of the matches in their own stadium. 1 times it was enough to score one point, while 1 times the guests took all points. After 3 games in the season, Ludogorets has one victory, zero draws and two losses.

Coach Stanislav Genchev’s team tends to score in the second 45 minutes of the game. According to current statistics, Ludogorets will score 1,00 goals in each home game and will concede 2,00 goals, which is 3,00 goals in total per match in front of their own fans. A look at last season’s goal record shows Ludogorets Razgrad at home with an average of 2,14 goals. The average number of goals conceded per home match is 0,71. The most common scores at their home stadium last season were 0:2, 1:1 or 0:1. In the current season, the most frequent result in home matches was 1:2.

In their last match, Tottenham lost 1:0 against Royal Antwerpen. The team has been successful in 2 out of 3 away games (66.67%) so far in this season. Tottenham was able to win two away victories. The team lost one game in the foreign stadium and in zero matches the teams separated with a draw.