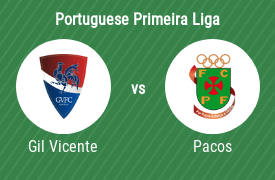 Gil Vicente and Pacos compete in the Portuguese Primeira Liga on 02.02.2021. The offical start is at 21:15. Municipal de Balaidos is the arena where the match is taking place on Tuesday. So the actual 16th placed team is playing against the 5rd place side.

Gil Vicente F.C. recently lost a match 1:0 against Braga. The home team has won 3 out of 15 matches in the past six months. Gil Vicente had two victories, two draws and three losses in front of their home crowd. In the current season, Gil Vicente won 28.57% (2 out of 7) of the matches in their own stadium. 1 times it was enough to score one point, while 3 times the guests took all points. In total, Gil Vicente has won 3 out of 15 season games. While it was enough to draw four games, eight matches ended without points.

During the second 45 minutes of the game, coach Ricardo Soares’ team is able to score most of their goals. Gil Vicente currently scores an average of 0,71 goals per home match and concedes 0,86 goals. This results in a total of 1,57 goals per game. Previous season, Gil Vicente F.C. scored an average of 1,53 goals in their own stadium and conceded 1,24 goals. The most frequent results at their home stadium last season were 1:1, 2:0 or 0:0. In the current season, home matches most often end 0:1, 0:0 or 0:2.

In their last game, Pacos won 0:3 against Maritimo. The team has been successful in 3 out of 8 away games (37.5%) so far in this season. The statistics for the past 6 months show eight wins, four draws und three defeats. In games in away stadium three wins were achieved. Two games were lost while three matches ended without a winning team.