Den Bosch and Excelsior encounter each other in the Dutch Eerste Divisie on 23.10.2020. At 21:00, the referee will start the game. In that case, 11th placed team in the table is guesting at the actual 15th in the table.

In their last match Football Club Den Bosch played 1:1 against Almere. The hosts have magaged to win 2 of their 7 games of the recent 6 months in their favour. The team has had two victories, one draw and one loss at their home stadium. Den Bosch has managed to win 2 out of 4 home games (50%) in the current season (20/21) so far. One game ended in a tie and one match was lost at home. After a total of 7 matches in the season, Den Bosch has two victories, one draw and four losses.

Coach Erik van der Ven’s eleven tends to score in the second 45 minutes of the game. Den Bosch’s current record shows an average of 2,50 goals per game at home, of which 1,50 are their own goals and 1,00 are goals scored against them. Previous season, Football Club Den Bosch scored an average of 2,07 goals in front of their own fans and conceded 1,33 goals. Home games usually ended 3:2, 2:2 or 1:1 in the previous season. In the current season, home matches most often end 1:1, 1:2 or 2:0.

Their last match, Excelsior had won 2:0 against Maastricht. This season, the team has been successful 2 out of 4 matches in away stadiums (50%). Excelsior has won three games and lost four matches in the last 6 months, with one match ending in a draw. In games in away stadium two wins were achieved. One game was lost while one game ended without a winning team.

In the running season, coach Marinus Dijkhuizen’s team have scored an average of 2,50 goals per away game, mainly in the second 45 minutes of the game of the match. On average, 4,00 goals are scored when Excelsior plays in foreign stadiums. Last season’s statistics show Excelsior scoring 1,50 goals per away match, while they conceded 1,64 goals. As the away team last season, the side’s game most often ended 4:1, 1:2 or 0:0. Excelsior’s away games this season have ended primarily 1:1, 0:3 or 3:1. 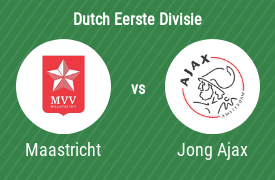